Lance Corporal William Kemp of the 2nd Scottish Rifles was killed in action one hundred years ago.

I grew up seeing his name on the local war memorial, as did my father who was also named William Kemp. My dad was keen on family history, he could tell me all the living relatives and knew their exact relationship to us. He believed that all the Kemps in the Old KilpatrickÂ are were interrelated. So I’ve always seen L/Cpl William Kemp as part of my family, even though I cannot directly connect him from further research.

William was almost certainly a regular soldier before WW1, either that or a recalled reservist. The Scottish Rifles were a regular battalion and started the war in Malta. However they were recalled and sent to FranceÂ arriving in November 1914. William’s Medal Index Card shows that he arrived in France on 5th November 1914. It also records that he was killed in action.

I’ve tried to find the war diary for 2SR but it isn’t available online and I’ve not been able to go to either the PRO in Kew or the Regimental Museum in Lanarkshire. So I don’t know what was going on in early January 1915. Mostly likely it was routine in defence.

The newspaper clipping comes from the Lennox Herald which my mother found in the archives in Dumbarton Library.

I’ve been exploring the world ofÂ Perfects with some friends by running a roleplaying session with the Full Moon games group playing the senior officers of a police counter-terrorism group. More details on Operation Hawkeye. I couldn’t resist writing some press stories as a result of the session. 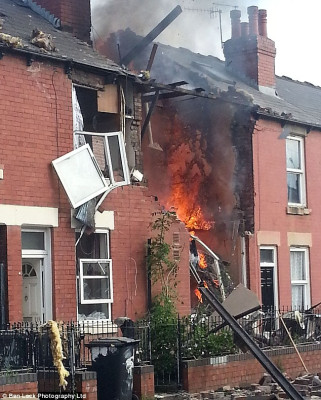 Silverton residents were woken by automatic gunfire and a bomb blast as terrorists fought off a police raid. Brave officers stormed through a hail of fire to take out the terrorists. One terrorist was confirmed killed by police, although not before two officers were wounded. Another is believed to have blown themself up in a suicide bombing.

Commander Coalfield, the Counter Terror Chief, called on citizens toÂ lookout for accomplices to the GM terrorists that may have escaped.

Forensic teams are scouring the scene for clues to where the explosives and firearms came from and any evidence that will keep the suspects behind bars.

Commander Coalfield “Acting on confirmed intelligence officers of CT conducted simultaneous raids on properties in London, supported by other emergency services and the Metropolitan Police Service. The intelligence received indicated that a group of genetically modified individuals were planning a terror campaign in central London in an attempt to over-turn the provisions of the Genetically Modified Humans Act. This campaign was intended to intimidate ordinary people as well as Members of Parliament.

Our sources suggested that the group in question were well funded and had secured weapons and know-how from overseas. We therefore acted promptly to deal with this threat. My officers were just in time, and we discovered an armed terror cell of genetically modified individuals in the process of preparing for an attack. On gaining entry to the house armed CT officers were met by automatic gunfire. Undeterred they pressed home their entry, which resulted in several officers becoming casualties. Some of these casualties were caused by a suicide bombing, we know from studies that the genetically modified are prone to suicide.

[Police Drones drop to window height, switch on bright lights and the speakers blast “POLICE – LIE DOWN AND STAY STILL” on a loop. Two officers pound the door open with an entry e. A tense moment passes as the door initially resisted being opened. Immediately between the camera and the door opening team are a constable and an officer with Chief Inspector rank insignia on the rear of the helmet.

The door opens and the constable and the Chief Inspector rapidly enter. Shots ring out and the leading constable falls. The group pause just inside the doorway, more shots are heard. Two flashbangs are thrown into the next room.

Seconds pass, then two loud bangs. The Chief Inspector leads through a hail of gunfire, to cameraÂ police officer falls in the doorway. The view cuts to another camera, the Chief Inspector is seen to fire twice as the terrorist brings the weapon up. Then the ceiling collapses. ]

[Back to the press conference]

Fortunately our officers were all well protected and three of the five are expect to return to duty very soon. Two others remain in hospital under medical supervision, both are expected to make a full recovery. One terrorist was killed, we believe another blew themself up and we have three others in custody. It is possible that they have accomplices in other locations and I am calling on the public to remain vigilant and report suspicious behaviour immediately.” 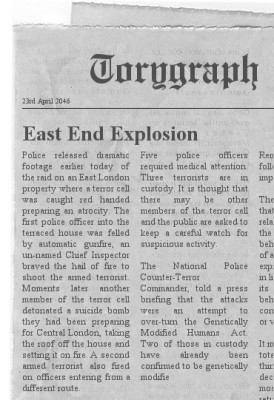 Police released dramatic footage earlier today of the raid on an East London property where a terror cell was caught red handed preparing an atrocity. The first police officer into the terraced house was felled by automatic gunfire, an un-named Chief Inspector braved the hail of fire to shoot the armed terrorist. Moments later another member of the terror cell detonated a suicide bomb they had been preparing for Central London, taking the roof off the house and setting it on fire. A second armed terrorist also fired on officers entering from a different route.

Five police officers required medical attention. Three terrorists are in custody. It is thought that there may be other members of the terror cell and the public are asked to keep a careful watch for suspicious activity.

The National Police Counter-Terror Commander, told a press briefing that the attacks were an attempt to over-turn the Genetically Modified Humans Act. Two of those in custody have already been confirmed to be genetically modified and tests are under way on the others involved.

The scene at the house is one of utter devastation, two blasts are understood to have ripped through the house. The first in the attic space which police have confirmed was from a mix of high explosives and at least one incendiary device. A second later explosion is believed to be a residual gas explosion from damaged pipes set off by the fire. Both neighbouring houses were also damaged and the residents have been evacuated. Police forensic teams are still on the scene and are expected to remain for several days.

Fatal Choices: Wargames, Decisions and Destiny in the 1914 Battles of Coronel and Falklands by Seth Owen

I backed the Kickstarter campaign and got both the ebook and the paperback version of this as well as some pre-cut counters for playing the scenarios.

The book is a fascinating tour of the what if as well as the real history. It takes us through the technical and political backgrounds of both sides, the vessels and the commanders. Owen explains why the situation was what it was, why the protagonist navies had chosen their strategy and how they had got their ships on station when the first world war started.

Each of the battles is presented as a playable scenario, with basic rules in the annex and some counters (I got the pre-cut set as part of the Kickstarter, but the book has a copyable annex). In addition to the house rules in the book there are also suggestions for how to play the game with a couple of other popular sets of naval wargame rules.

Doing this allows readersÂ to understand how much leeway the real result had, what was inevitable, what was plausible and what was bad luck or poor judgement. The factors affecting this are also explained in the text. For example British gunnery was poor, most of the sailors were reservists recalled at the outbreak of war, so they were out of practice and many unfamiliar with the kit installed on the ships. They were also scratch crews and hadn’t had much time to practice together.

This is so much more than a history, it offers an insight into how and why the events in the South Atlantic and Indian Ocean turned out the way they did.