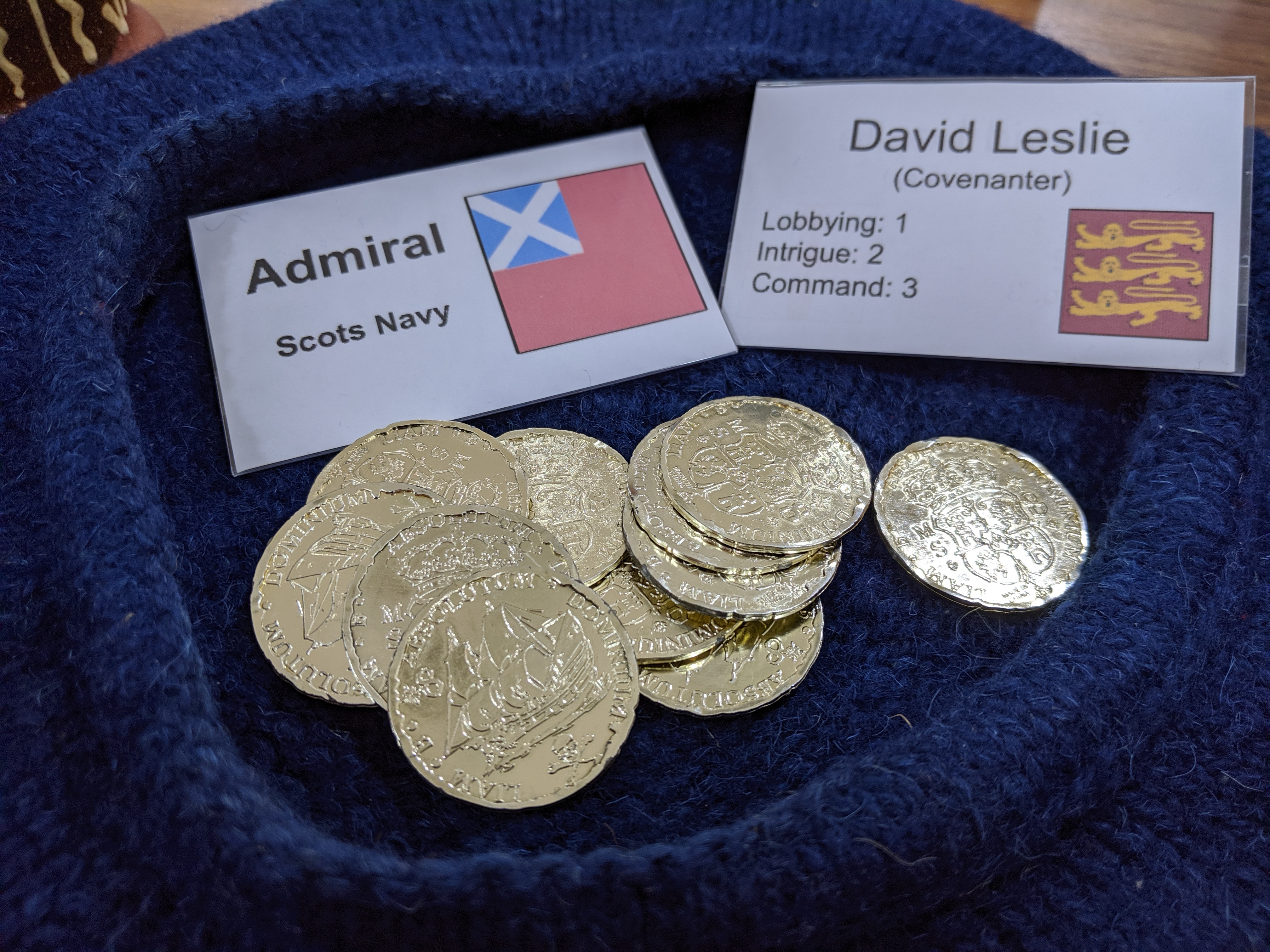 Today I played David Leslie, Admiral of the Scots Navy in By the Grace of God, a Megagame of the period at the end of the first of the civil wars in the 1640s. The game started in the Autumn of 1646 with the Covenanters in control of King Charles I, by the Grace of God King of Scotland, England and Ireland. Parliament was riven with factions disagreeing on religion, form of government and economic policy. Activists caused trouble all over the country, and there were many armies, and navies, abroad.

What happened in By the Grace of God?

As with all megagames, I have almost no idea what happened most of the time in By the Grace of God. My role, as a Covenanter and Admiral, meant that I got involved in what happened at sea and in His Majesty’s Privy Council, to which I was elevated early on. The King was held prisoner, and we controlled access. The naval activity was over quickly, so I had more time to attend to the King’s visitors than the other players.

At sea I started with almost no money and three squadrons of ships. Two of these were in the Irish Sea and one in Edinburgh. The other navies being played were

At this point no other navies were at sea, although that would change.

I was second in the order of play, after the North Sea Fleet. So I didn’t know what the others might do. I played it safe in the first turn and sent one squadron raiding off the coast of South America. Everyone else wholly commited to raiding. The Royalists didn’t roll well and took some damage, the two Parliamentarian fleets did spectacularly well, at least we thought so at the time. They made about £30,000 in prizes, mainly from Portuguese ships off Africa.

I took £6,000 in prize money from Spanish vessels, enough to lay down another keel (£5,000 with another £5,000 needed to complete it). I reckoned that I could run a fleet at a profit. So I went back to borrow a couple more gold to pay for the three squadrons next time with a promise that I’d bring more back with me.

Charles, By the Grace of God King

In between taking Spanish ships and starting a building programme that would eventually replace the entire Scots Navy, I visited the King. He was alone in Newcastle with few visitors, mainly his Queen and elder son. None of the English came to see him. I brought him Scots delicacies (Tunnocks Tea Cakes) and listened to him.

Realising that our objective was to ensure that a Scots King remained on the throne of England I reassured him that we were working to restore him, and in the meantime we were protecting His Majesty from his disloyal English subjects. What I think helped was always starting with broad agreement to whatever Charles wanted, and only then steering advice to improve the suggestion.

Winter wasn’t a great time to be sailing. Pickings were generally slimmer for privateering, and the poor weather meant a higher chance of damage. So I sent my squadrons to the Antilles. We took two Spanish and one Dutch merchant for £12,000 in prizes. This paid for completion of the fourth Scots squadron. Other navies took a lot of Portuguese vessels. Blake took £40,000 in prizes off Africa.

I made another visit to His Majesty and brought him the news of what the fleets were doing. He seemed happy to be visited. I also let some of the English Parliamentarians visit, some Presbyterians and a member of the Middle Party. They were pretty respectful of His Majesty.

What I hadn’t realised was that Parliament wasn’t working. Our team leader (Alex Beck playing Archibald Campbell) approached me to check how I stood on support for the King. The Covenanters are aristocratic Presbyterians, and so long as the King supports the Covenant then we support the King. It was also clear that the English Parliament wasn’t going to pay the £70,000 they owed us for supporting their war.

Alexander Leslie, our General, joined us. Together we approached the King. We told His Majesty that since he was, by the Grace of God, our King, we could not hold him prisoner, but would continue to ensure his safety. We committed to supporting the King.

This was the point where I realised how much I’d had an impact on the King. I was the most junior of the four members of the Covenanter cabinet. However I was the one the King wanted in the Privy Council. Suddenly I was one of three close advisers, the other two being the Prince Charles, and the Queen.

I wasn’t taking notes, but I was consulted several times before His Majesty affixed his seal to proposals. I was dragged into several conversations to add an opinion in support of His Majesty.

In spite of this I also managed to find time to run the Scots Navy. I made Prince Rupert the Vice Admiral so that I had time to attend Privy Council meetings.

In the Spring I sent three squadrons back to the South American coast. The furth supported the army operating in the North Sea. We took two Spanish ships and made £12,000 in prize money. One of our squadrons was damaged. This money started construction of a fifth squadron, I retained £6,000 to fund repairs and maintenance of the Navy and passed one gold coin back to the team.

On the land campaign Parliament took York because the main Scots army had withdrawn to Northumberland. The garrison left in York was too small to do more than keep the peace. This was to cause some discomfort in Royalist circles.

The King found out about the loss of York from the news sheets. His other close adviser had become John Birkenhead (picture above) who was strongly Royalist in his reporting. Thankfully I’d been at sea and then I’d mentioned the loss of York to the King when I next saw him.

The whole Privy Council was pointed at and hairdryered. After failing to pin it on Lord Nithsdale (an NPC) I was tasked with finding someone who could explain why the King hadn’t been told.

I went back to sea, hoping that the King might calm down a bit. With four squadrons in play I took them all to the Gold Coast off Africa. We raided, alongside Blake’s North Sea Fleet. The catch was two Dutch and two Portuguese ships, and we took home £40,000 in prizes. With it I completed the fifth squadron, gave Prince Rupert £3,000 towards repairs for the Royal Navy, and contributed £25,000 to the Scots Treasury.

The King was not calm when I returned. He wanted someone to explain the failing at York. So in the absence of anyone else I persuaded Alexander Leslie to explain. This sort of worked. We got given orders to push South. We brought the Scottish Royalists in to help persuade the King about the need to plan and prepare. He wasn’t buying it. So instead we simply promised to move South.

What also became clear was that the young Prince Charles was much more reasonable than his father. He was suggesting more moderate positions that might win support from several of the opposing factions.

The Portuguese and the Dutch weren’t happy with the level of privateering happening. All the British fleets were at it. The two parliamentary fleets were the most successful. Blake was taking £30-40,000 each season. We were probably next as the Channel Fleet was guarding the Channel and the Celtic Sea.

The Portuguese sent a fleet to the Gold Coast, so we went back to South America. A couple of ships got damaged by the weather, and we took some Spanish ships for £18,000 in prizes. We started construction of a sixth squadron.

Buoyed by some success in moving the Scots Army South, and mutinies in parts of the New Model Army, the King amended the proposal before Parliament. Prince Charles and I attempted to persuade him to avoid going too extreme. I mentioned drawing a distinction between the idea of Parliament and the current objectionable people within the building.

The idea ran further than I expected and a new, Royalist, parliament was suggested. It was helped by the Levellers raising a rebellion and took control of London. They excluded most of the factions from parliament. While from their perspective it helped secure reform they wanted, it drove people to the King.

The only sea battle occurred about then. His Majesty had ordered us to destroy the Wexford Pirates. He hadn’t understood that they were being run by Prince Rupert. I’d tried to persuade the Wexford guys to reflag as Royal Navy so we could report success. They demurred, even though their entire fleet was damaged. In their way home the Channel Fleet intercepted them and sank three of the four squadrons. That was enough to let us report success, not bothering to give credit to the Parliamentary Navy.

Rather than finish off the sixth squadron I used my shipyard to repair both damaged squadrons. The other two squadrons raided in the Antilles, taking a Dutch and a Spanish ship for £8,000.

The Dutch heard of their further losses and decided that they’d get some revenge on the Scots Navy. A Dutch squadron came into Leith and burned some of the under construction sixth squadron. I took the opportunity to point this out to His Majesty in the hope that it would distract him from ordering us all to Ireland.

A Scots cabinet meeting covered the King’s orders and how each news of Victory made him beer ever more to absolute rule. It was also observed how reasonable Prince Charles was. A short discussion about loyalty to the Crown, and it’s heirs and successors followed. An observation was made about the steepness of the walls of Edinburgh Castle and the number of stairs.

I will confess that I’m actually hazy about the exact timing of all this. I was quite involved, yet out of the way at the same time.

At sea we lost a squadron to the Portuguese, and had a couple more damaged. We turned away some Dutch merchants rather than provoke them by taking more prizes. We still found something, but not as much as previously.

At this point King Charles I mysteriously died of natural causes. He fell out of a window in Edinburgh Castle. The Privy Council gathered to proclaim the Prince as King Charles II, by the Grace of God King of Scotland, England and Ireland.

As a group we ended up more coordinated as a result of Charles II. He put together a good proposal, called a Parliament in York and won over all but the most radical of the factions.

The game lasted another couple of turns, but from that point it was all over. The end was inevitable and there was nothing that was going to change it.