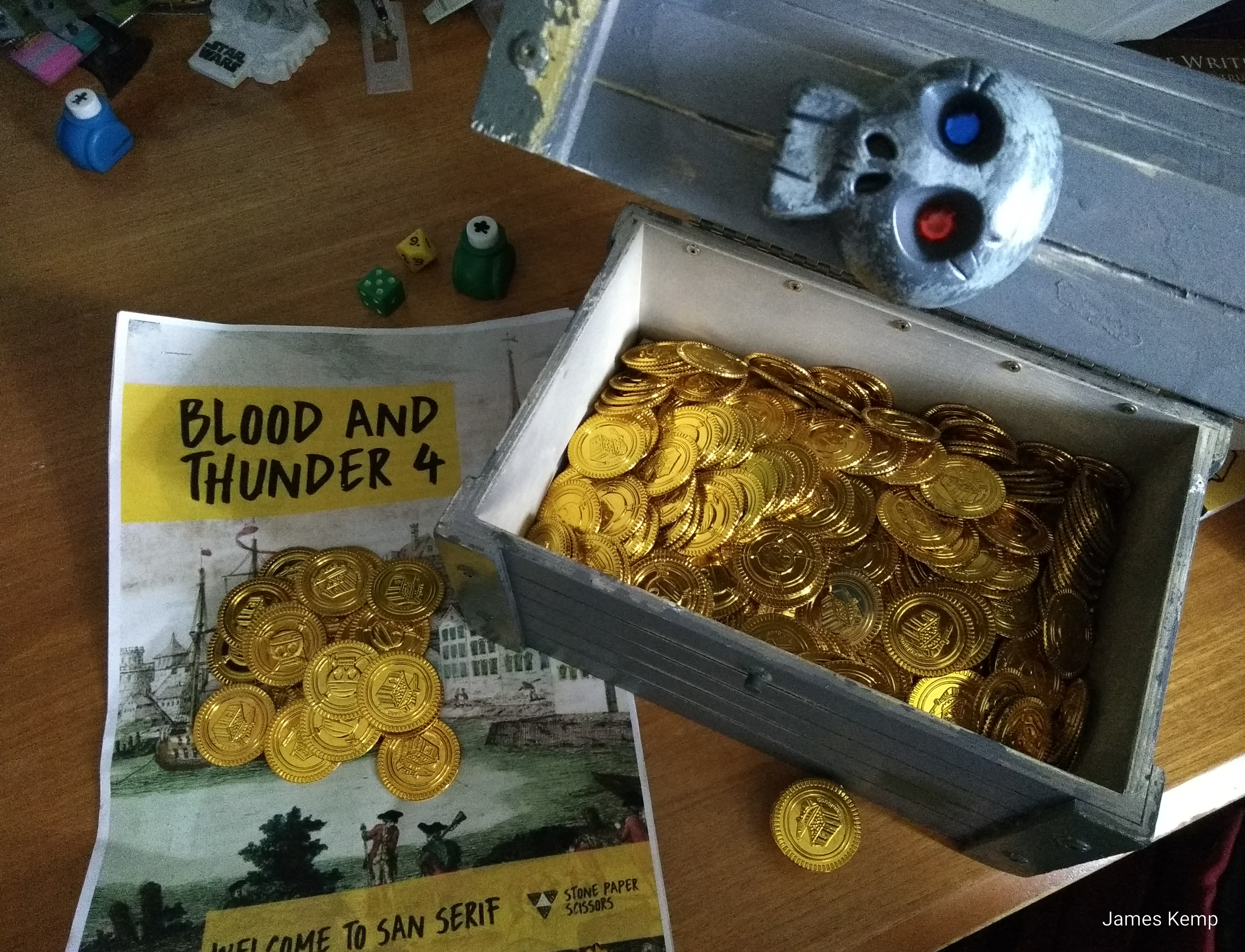 Alexander and I played arms merchants in the Blood and Thunder 4 pirate megagame on Saturday. It was mostly a fun game, although there were a couple of sticky points for us as merchants.

I was cast as Theophilus Blodwell, a Glaswegian on the run from the British Authorities. As well as being an arms trader with a fine grasp of the importance of economics (i.e. that the money should end up with me) I was also a member of the ‘Protectors of the Seas’. The Protectors were a secret society opposed to the ‘Sons of the Sea’. The latter group were collecting ancient magical artefacts and intending to use them to bring about the end of days. So I had a side mission to identify and stop the Sons of the Sea.

Alexander was the owner of Weygand and Sons, and his side mission was to find six model ships and then to play a wargame with them involving at least four other people. He had to write the wargame rules himself, which he did right at the beginning of the day. I suspect we’ll need to bring them to Chestnut Lodge Wargames Group the next time we go so that he can try them out to see if they would have worked had he found sufficient model ships.

I’ve lost count of how many megagames I’ve played or been control for. This was badged as Blood and Thunder 4, but I don’t recall the first three.

Blood and Thunder is set on an unspecified Caribbean island under Spanish governance in the early 18th Century. There were a number of pirate ships, each with a crew of about 15 players. When at sea they worked cooperatively to find and board merchant ships. The faster they did this the more they can do in their sea time.

Every ship had scheduled port time. During this time they could sell things they’d captured, replenish consumables and effect repairs. They could also carouse in the taverns and pursue plot points with people from the town or from other vessels.

My role in Blood and Thunder 4 was as the salesman for Weygand and Sons. Weygand and Sons was one of three large merchant companies on the island of San Serif. We all sold arms and ammunition, as well as acting as buyers for cargo. Alexander was the owner of Weygand and Sons, so he was my boss for the megagame.

For me the game fell into three quite distinct phases, all of which had different challenges. These were:

Although the game properly started at 10, we had a whole hour as traders with pretty much nothing to do. None of the ships came into port until 11. We needed a little bit of time to shake out, and talk amongst ourselves, but a whole hour was too much. It was also too early in the game to be able to start the side plots. That said Alexander used the time productively to write the naval wargame rules he’d need with six ship models.

I did do a bit of negotiation around supplying the town’s shore battery with powder and shot in return for tax exemption. It almost worked, but the mayor vetoed it because he needed a source of income and exempting us from cash payments would have eaten into that. In the end I got undercut on the supply contract by one of the other merchants who decided to sell it at cost.

Blood and Thunder – the ships come in

At 11 the first two ships came in. However the pickings were slim. Inexperienced crews had (correctly for them) chosen the lower risk routes to raid. This got them less cargo. Also what they did pick up wasn’t that valuable. We also suffered a bit as merchants because our warehouses were at the back of the room from the pirate ships. They had to get past the street traders and the taverns to reach us. By the time we saw them some of the valuable (to us, but not to the pirates) cargo had been bartered with the street traders.

We had another problem at this point too. We didn’t have much cash by way of a float, and the locals taxed us before the trading was complete, making it thinner still. So we weren’t in a position to buy cargo for cash. There were three traders, and two pirate ships. By chance I got missed by the main officers buying for the ships. I did do some trading with individual pirates, but it was almost all barter and for low value items. It was at this time that I picked up a strange eldritch item that glowed in the dark. I recognised it as an item of power and gave the pirate who offered it to me a blunderbuss in exchange.

The bartering continued, between attempts to convert newly acquired stock to cash within the townsfolk. I picked up several bottles of wine, a couple of snuff boxes, anf a valuable necklace that turned out not to be convertible into cash that reflected the barter value. I’d expected a bit of this, but I was surprised at the scale.

The wine came with a quality rating. All the ones I handled had ratings between 1 and 10. However I’m assured by one of my customers that there were bottles up to 12 in quality.

My expectation had been that lower quality wine would be essentially worth the same as rum. That is it would have a use to players, but would be worth more than one gold per bottle (maybe multiples per gold). The higher value stuff would have a value above that of the standard, and the top values would attract a premium.

As far as I could tell only one player had an interest in wine. I sold him an 8 for 10 gold early in the game. So I valued the rest accordingly. I never sold another bottle because he raised the bar to a minimum of 10. I didn’t count, but I had over a dozen bottles at the end of the game, most between 4 and 8 in quality. My estimation is that there were over a hundred bottles in circulation based on the amount the merchants held and the number of times we turned down offers to trade wine.

As a fix to this there ought to have been a bit in the social reputation rules about consuming wine. It would have driven a bigger market which would have made the many bottles in circulation valuable for both us and the pirates. I’d have given a point for publicly consuming a bottle (per person you supplied). I’d give another point of the quality of the wine was higher than the person’s social standing. This would have made the quality people drink the nicer stuff.

There was an entry in the player guide about valuable items. The suggestion was that they should be worth a minimum of 5 gold. I accepted a few in barter before I realised that they had no value. Not one of the players I encountered wanted one of these, and I could only convert them to cash for 3 gold each.

The idea in the game rules was that players would want these inherently valuable items. However there was no game purpose to them and no-one seemed to have them for a side plot, unlike the strange coins, model ships and the scraps of paper.

Everything needs to have a game purpose, even if just to soak money out of the game. However that latter purpose needs to be driven by people wanting them to meet personal objectives rather than as cruft.

There was a point about half twelve when I hadn’t sold anything for cash and had run out of money. My personal morale plummeted to the point where I was about to ask to be re-roled. I couldn’t quite see the value of trading as none of the pirate ships could afford our big ticket items, and the individual pirates didn’t have enough cash to pay for the replacement values of the goods O could sell them.

I wallowed a little, for maybe five minutes, and spoke to my trade control about it. Particularly the feedback on the so-called ‘valuable’ items. He was sympathetic, and I know he spoke to Jim about it.

Thankfully I held my nerve on the roling. I’m a veteran megagamer, I lost count some years ago. One thing I’ve learnt, and remembered on Saturday, was that player morale personally is often the difference between success and failure.

The next wave of pirate ships that came into port were cash rich. Morale soared, and trading resumed in earnest. I lost track of all the individual trades, several times I acquired merchandise after selling it. This practice saved me from large losses when the cost of powder and cannonballs doubled. I was able to renegotiate those before the deal was finalised. My biggest deal was with the captain of the Queen’s Revenge. She bought a heavy cannon and some powder and ball for it with 100 gold in cash.

In the space of less than four hours we’d gone from being insolvent to being cash rich, with over 300 gold in the company treasury. I had 23 gold personally (from a 10% commission on sales), along with a stock of interesting items (I’d bought the valuable items and some of the better wine from the company).

Towards the end of the game, when I was happy that we’d traded enough to see us solvent to the end, I started to worry about my side plot as a Protector of the Sea.

The Governor’s secretary had finished his obsession with dissecting animals and was now looking out for strange items. I found this suspicious, suggesting that he might be one of the Sons of the Sea that I was supposed to stop.

I hatched a backup plan to stash some gunpowder at his house to blow him up. Before carrying it out though I had a chat with him about these items he was looking for, under the pretext of having been offered one earlier and that I could possibly get him one. I said that I collected antiquarian artefacts, older than the colony.

He decided to risk it and asked me if I’d heard of the secret societies. I confirmed that I knew of them, but thought them somewhat shady. He outed himself as a Protector, so I confirmed that I was too. By chance he’d infiltrated the Sons of the Sea. I was able to do so too and compiled a list of members. I also discovered that they were about to conduct a ritual, although it wouldn’t work because they’d been misled about what they needed for it. The Governor’s secretary and I also had some of the components.

So we told the Colonel that there was a treasonous plot going on in the tavern. I went along with a couple of loaded blunderbusses to support the police action. As it happened I only needed to provide moral support. The regular troops easily subdued the Sons of the Sea and they were taken to prison pending execution.

The game ended there, not because of us busting the Sons of the Sea, but because it was 1630 and The Rackham’s Ghost had just been sunk!

Other Blood and Thunder reports