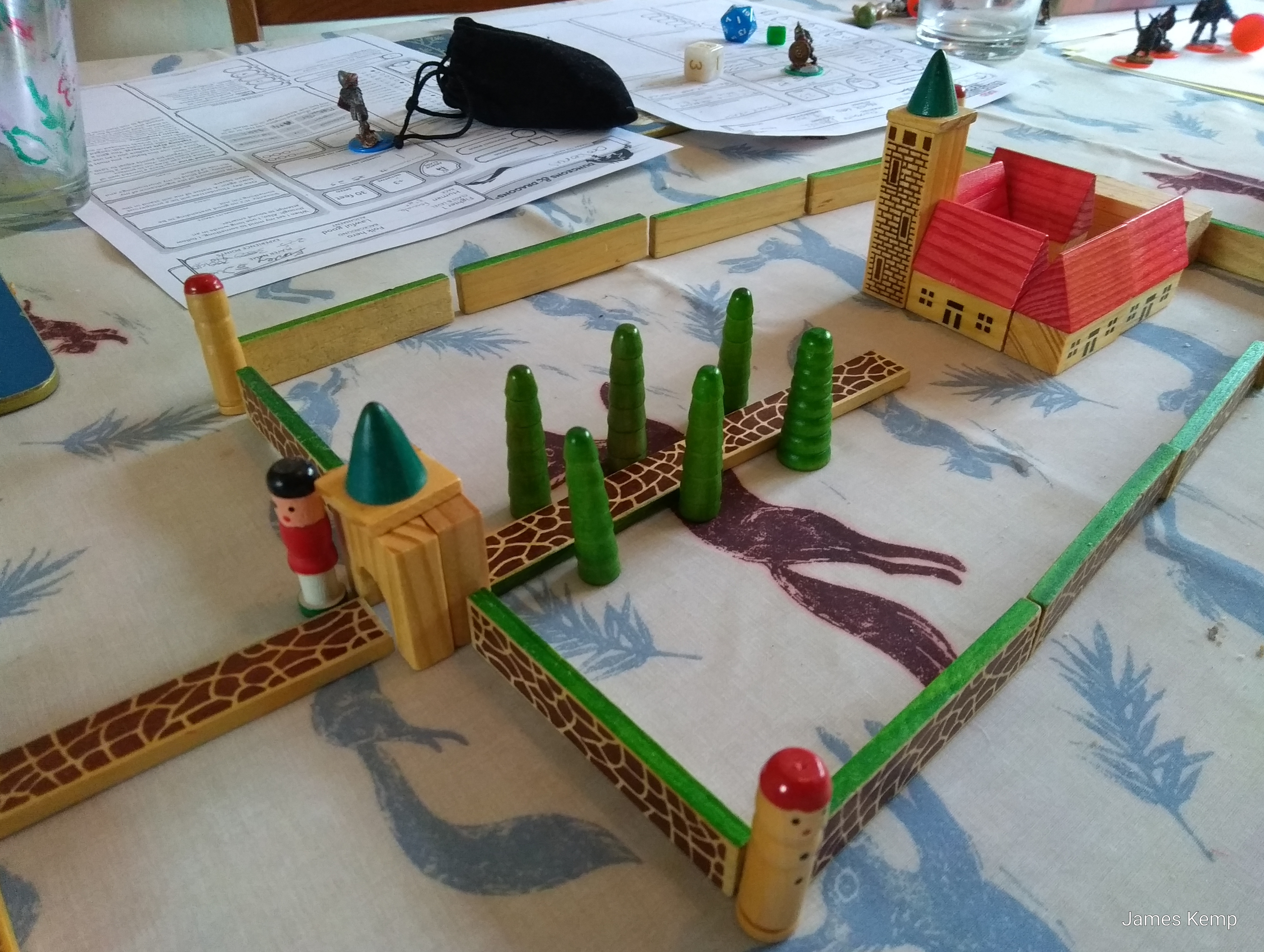 Tokuemon Takedown is the third, and final, session in the Yojimbo mission followed hot on the heels of the Silkworm Inn incident. Starting without pause where we left off the party gathered on the street outside.

A crowd of potential helpers had arrived to put out the fire. As they assembled Harbek had created water inside the Silkworm Inn to dowse the flames. Kohei recognised Kanji, the town clerk of Yojimbo, in the crowd. They both played, and lost, regularly at Tokuemon’s table.

Realising that they still needed to rescue Nui, Sator and Elgon sought out the alley to the side of the Silkworm to work round the back. Sator, being a halfling, lead, allowing Elgon to see over him and provide cover if necessary. On entering the Alley they found it blocked by an armoured human backed up by another human with a bow. This was communicated to the others.

Harbek and Zia decided to go long and outflank from the alley a couple of buildings to the right of the Silkworm. They set off at a run while Sator tried to establish why the men were blocking the alley.

The negotiations were brief. Sator was answered with an arrow, which narrowly missed him, Elgon and the crowd to bury itself at human head height in the Building across the street. Elgon reacted rapidly and used burning hands, scorching both humans and setting some of the rubbish in the alley on fire.

Kohei and Kanji followed up on the commotion in the alley in time to see the larger well armoured human charge Sator and jab him with a sword cut. Sator gave as good as he got, and Elgon used magic missile on the attacker. The bowman at the back shot at Kohei, sticking an arrow in him. Kohei also shot back, but missed.

Elgon realised that he was running out of spells, and stepped back. The alley was quite narrow and there wasn’t quite room for two abreast. Kanji healed Kohei a bit while Kohei traded shots with the bowman. Similarly Sator and the swordsman parried each others blows, although Sator got a bit home and drove the swordsman back down the alley.

From the side gate of the Silkworm Inn a third armoured person lead two horses, one with a suspicious package in a blanket tied over the saddle.

Sator and Kohei both shot the swordsman with their bows. Elgon used his last spell to magic missile the third warrior and both horses. The main effect of this was to panic both horses. This in turn caused as yet unseen horses in the Silkworm’s back courtyard to neigh loudly and rear up.

The brief panic bought enough time for Harbek and Zia to come running round the corner. Harbek lead with his flaming axe, and in one mighty blow cleaved the helmet on the third warrior in two. He fell to the ground in a spreading puddle of blood. This so demoralised the others that they immediately threw down their weapons.

On closer inspection the ‘package’ on the second horse was found to be Nui. She had been tied and gagged before being carried downstairs and thrown over the horse. Interrogation of the prisoners, including the unfortunate third warrior who was healed, pointed the finger clearly at Tokuemon. On finding the Silkworm under attack and on fire they’d decided to evacuate to Tokuemon’s country house.

Realising that they weren’t expected to report in yet the party planned a surprise raid on Tokuemon’s country house. They decided to go in the middle of the night and rested up to await darkness.

The party rode out to Tokuemon’s place. They left Oroborus looking after the horses in a copse a couple of hundred yards from the edge of Tokuemon’s house. As you can see from the picture, the house is a grand affair, surrounded by a ten foot high wall. There are guard towers at each corner and a grand entrance with a guard box outside where it joins the main road into Yojimbo.

Sator and Kohei crept up to the guardhouse to take out the guard, bows in hand. The plan was to be as silent as possible. This worked up until Kohei walked into a bush. This alerted the guard, who came out of the guard post to investigate. Sator and Kohei froze, and the guard peered into the darkness shining his lantern around.

The guard was clearly silhouetted against the whitewashed walls of the compound. When he turned to go back to his post both Sator and Kohei loosed arrows at him. Two arrows struck home, followed rapidly by two more. The guard fell to the floor with a clatter. Sator and Kohei tensed. Had anyone heard the guard’s fall?

They listened carefully, but all appeared silent. They waited a few moments longer before Sator snuck forward. Kohei couldn’t hear anything, and Sator established that there was a light coming from a room inside the gatehouse. Closing one eye to protect his night vision Sator went closer. Snores could be heard from within.

Sator slid silently to the door and felt the key in the back of the lock. He gently eased it out, closed the door behind him and then locked it. Taking the key he went back out to signal the others to join them.

Sator lead the party into Tokuemon’s compound. Wary in the silence and darkness lest there was an ambush lurking, they slid from tree to tree on the outside of the drive. Checking out the front they decided that a rear entry would be safer.

They worked their way quietly around the back of the building. Sator picked the lock to open the kitchen door. Inside the house was silent and still. A short muffled debate sprang up when Zia wanted to collect snacks for later. She was overruled.

The grand double height dining hall was next. The table was bare, and seats stacked on top of it. Cushions protecting the table top. Moonlight filtered through the windows, the curtains all still tied back.

From there it was Tokuemon’s Parlour, with the gaming table so familiar to Kohei and Kanji. After that it was the entrance hall, and up the stairs to the tower where Tokuemon had his personal quarters.

The entrance hall was stone flagged with carpets in the main walkway. It also had stone walls and a smooth plastered ceiling. To the left of the main door as you came in was a grand staircase, with a landing as it turned right. This was opposite the wide doorway into the Parlour.

As the party came into the darkened hallway they became aware of Tokuemon standing on the landing. When they were all in the hallway he asked what they were doing in his house in the middle of the night?

Kohei replied “You kidnapped my sister, and I’m here to make you pay”.

The party tried their best to dodge, but it was rather an enclosed space. The carpets and wall hangings burst into flames, illuminating the space. Several of the party were left reeling, if Tokuemon got a second chance it would be their last.

Harbek shot Tokuemon, a good shot from his bow that went home. Tokuemon reacted without thinking and sent a lightning bolt from his fingertip to Harbek. Harbek writhed in pain, it was almost more than he could cope with. Despite this the others shot arrows into Tokuemon. Even with five arrows sticking out of him he just laughed at them.

Harbek summoned up the last of his energy and cast Hold Person on Tokuemon. His laughter faded as he struggled vainly to escape. Most of the others shot arrows into Tokuemon.

Zia took the moment to hit the button on the lightning javelin she’d found. Not sure what to expect. A blinding flash and a burning smell accompanied a loud tearing sound as lightning joined the staff to Tokuemon. No longer held by the spell Tokuemon was propelled into the wall behind him. He fell limply onto the floor.

Determined to get revenge Harbek launched himself up the stairs and removed Tokuemon’s head with his flaming axe before he could recover.

Having taken down Tokuemon the party had a look round his house.

In the private quarters they found a number of interesting items

In the Parlour there were several works of art, and also a load of cash, mainly in gold and silver.