There is much more from where this comes. Also possible is the section on Counter-Revolutionary Warfare (CRW), the chapter on use of artillery and the ever-useful Close Quarters Battle (“Fix Bayonets!”) chapter useful for those awkward occasions when you wake up to find that you’ve accidentally dug-in in the middle of an enemy position.

Following lessons learnt in the latter part of WWII where many young officers were killed, maimed, or lost the confidence of their men in house to house fighting it was decided that all officers had to be trained in the techniques of surviving FIBUA with their reputations intact. The following points should always be borne firmly in the front of your mind every time you and your men enter a Built Up Area (BUA).

1. Don’t run at a plywood door and then try to open it by giving it a good kick right in the middle. It is highly probable that your foot will go straight through the door. Not only is this uncomfortable it will not inspire confidence in your men. Let your platoon fool do this instead, it will be very good for morale.

2. When someone suggests that you stand atop a ladder while four of your men hold it and run at a first floor window remind them that you cannot adequately control the battle from atop a ladder and that your platoon sergeant would be a better candidate.

3. Don’t go in first, or second, third, fourth or fifth, in fact if possible wait until the building has been declared clear before going anywhere near it. Best of all is to sit a couple of hundred metres back and ask to have the village shelled flat for an hour or so before going in.

4. If you must go into a building avoid using holes anyone else has made – this includes doors and windows, especially doors. Always do it quickly with full auto selected, along with a nervous paranoiac disposition if you can manage it. (It must be stated that this cannot ever be real paranoia because the people in the building will be out to get you.)

5. Avoid windows with wire across them – wire tangles – the less said about this the better.

1. Remember to give whoever is in the room you are about to enter the respect they deserve – at least one grenade and the contents of your magazine. This is where plenty of practice at the game “I bet I can empty my magazine faster than you” really pays off.

2. When you’re in a fortified house always remember that your helmet makes your head bigger (or your beret if you’re a Para) and avoid all those beams and ammo-box sangars inside the building. Especially worth remembering if your command post is set up under a table.

3. Whatever you do remember not to brew up with your hexy stove on wooden floorboards! If you need smoke then it’s much more effective to pop a signal grenade.

4. Keep all your smoke grenades inside your jacket, or at least securely taped up with the pins bent. Smoke indoors is an absolute bitch and the little buggers tend to catch on doorways, wire, etc and go off. If they do you need to wear a respirator or get out fast, neither is to be recommended.

5. When the building is safe stay in it, any excuse will do – local defence, protecting a flank, establishing an OP, setting up a Command Post, organising resupply, guarding prisoners, treating the wounded. All good officers should be able to think up something original and appropriate in order to let their men carry on without them. Besides, everyone knows what soldiers think of their officers and they would far rather they weren’t there. If all else fails a simple “Well done Sergeant – Carry on” will do the trick. It’s worked for generations, there is no reason why it should fail now for you. (Possible exception here being lack of intelligence on the part of Paras requiring their officers to actually lead them and thus risk their lives. Not a recommended course of action – but then anyone foolish enough to leave a perfectly serviceable aeroplane when it isn’t on the ground must be rather suspect.) 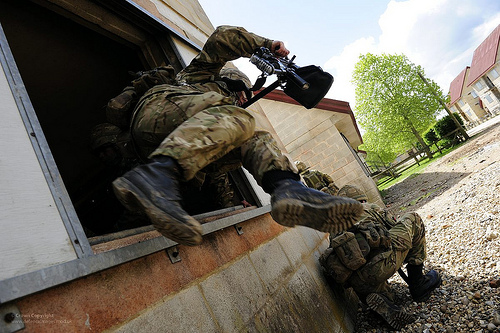 1. Avoid if possible, if not use the back door. This is the only circumstance in which you should lead from the front. Make sure that you have identified some good cover within five metres or so of the door or window you intend to leave from. Once you have get up and run as fast as you can and dive for the cover rolling into it to present the smallest possible target. This will undoubtably have alerted the enemy and any poor sod that follows you will almost certainly get shot at, the more that follow you the higher their chance of being hit. Hence the advisability of leaving first.

2. When making your mad, frantic dash for cover remember that bushes can conceal barbed wire. Also watch out for loose cartridge cases, they tend to be very destabilising on concrete/roads. Going arse over tit will not do your reputation much good.

3. Remember to take all your kit with you, and tie it down so that you don’t lose it on the way out either. It can be rather frustrating to find that you have left your hip-flask behind, and one does not want to have to risk one’s life more than is necessary. If you leave something behind send a soldier back for it – they are expendable, you are not.

1. Don’t do it – unless you’re a few hundred metres back and have access to artillery. If you do then you can have some good fun – especially if you mix White Phosphorous (WP) with delay High Explosive (HE). The WP sets the buildings on fire and the delay either explodes inside them or weakens/collapses drains and cellars. It should be borne in mind that using WP for anti-personnel or incendiary purposes is against the Geneva Convention.

2. If you must be outside get in cover. Nowhere is truly open and if you can’t find cover you’re not scared enough. Puddles always lie in low ground. Gutters provide decent cover if you are being mortared or shelled, but bugger-all if it’s a sniper. Cars are okay, but most high-velocity rounds will go straight through them – although they’ll stop 9mm quite happily (at least on the way out). As high-velocity rounds go there is not much you can hide behind – an old fashioned stone built wall or building is your best bet. If it’s a fifty calibre machine-gun don’t bother hiding, just pray that he’s a lousy shot and none of the rounds come anywhere near you.